Keynesian economic is a macroeconomic model that used to identify the equilibrium level, and examine disruptions, total production and income. Equilibrium is when total production and income intersect with the total expenditures. The Keynesian model has three basic variations designated by several macroeconomic sectors such as two-sector, three-sector, and four-sector. Keynesian model also frequently presented in the form of injections and leakages in addition to the standard total expenditures format. Keynesian model used to study some important topics and issues such as multipliers, business cycle, fiscal policy, and monetary policy.

Keynesian model normally presented as the Keynesian cross-intersection between the total expenditures line and 45 degree line. The theory was the standard macroeconomics analysis since the Great Depression of early 1980s and throughout the mid-1900s. The theory still counting to provide important insight into the working of the macroeconomic despite cross-intersection was largely substituted by total market analysis which is measured by aggregate supply and aggregate demand.

There are some basic principles of Keynesian economics such as the General Theory of Employment, Money and Interest in Keynes’ book, published in 1936. These principles has launched the modern study of macroeconomics and worked as a conductor for macroeconomic theory and macroeconomic policies for few decades.

The foundation of the Keynesian model is built by the four macroeconomic sector including household, business, government, and foreign on their expenditures for total production. The four sectors are household, firms, government and foreign. Household sector refer to everyone in the economy; consumption expenditure refer to their expenses on production used for satisfaction.

Foreign sector refer to all households, businesses, and government beyond the political boundaries of the domestic economy; net exports refer to their expenditure contribution.

The Keynesian model has three common variations, each variations established on a different combination of the four macroeconomic sectors.

Two sector model is the simplest Keynesian model which only refer to the household and business sectors, also called as the private sector. This variation is often used to demonstrate the basic operation of the model, including changes for equilibrium and the multiplier process. Two sector model gains the role of encouraged expenditures by household consumption and the role of self-directed expenditures by business investment.

Three sector model probably is the most generally analysed variation of the Keynesian model. This variation adds the government sector into the household and business sectors. This variation is used to examine government stabilization policies, especially how fiscal policy apply in government purchases and taxes that could close the gaps of recessionary and inflationary.

Four sector model consists of all four macroeconomic sectors such as household, business, government, and foreign. Interaction between domestic economy and the foreign sector often used to capture by four sector model, and also offers basis for detailed, empirically estimated models of the macroeconomics. 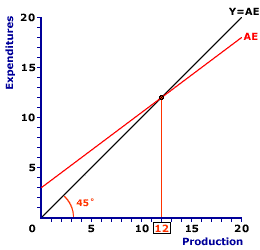 An important moment of analysis carry out using Keynesian model is the multiplier. Cumulatively reinforcing encouraged interaction between consumption and production that increases self-directed expenditure changes, investment, government spending, and exports is basic of Keynesian multiplier.