The Rice Subsidy Programme In Malaysia


Rice is an important security crop which acts as a staple food in Malaysia. During the last 30 years, rice cultivation in Malaysia was converted from a subsistence farming crop, to a commercial crop which is highly controlled and subsidized by the Malaysian government. As rice is a major staple food in the country, a large range of protective policies has been introduced by the government to protect rice farmers’ incomes and to ensure the existence of sufficient rice supply in the nation due to the country’s interest in food security. Local rice farmers produce approximately 60-70% of the domestic rice supply in the nation, while imports fill up the remaining 30-40% of the rice supply. Another interesting aspect of the Malaysian rice market is that rice firm Malaysia’s Padiberas Nasional Bhd (BERNAS) acts as the sole importer for foreign rice. On top of that, BERNAS is also responsible for the distribution of paddy price subsidies to local rice farmers and acts as a last resort buyer at Guaranteed Minimum Price (GMP), fixed at RM550 per metric tonne. According to the Finance Ministry of Malaysia, the government allocated RM528 million as subsidy for approximately 700,000 metric tonne of rice as of 2013, under the nation’s Rice Subsidy Programme. The cheapest type of rice which is subsidized by the Malaysian government is the Super Tempatan 15%, priced at RM1.80 per kg.

The Malaysian government aims to protect the interest of local farmers as well as low income earners via its Rice Subsidy Programme. One of the main reasons as to why the nation’s government should continue subsidizing rice is to increase the self-sufficiency level of the local rice market. According to BERNAS, the firm imports around 30% to 40% of Malaysia’s domestic rice demand to fulfil the nation’s rice requirement. This shows that the local rice market’s sufficiency level is only around 60% to 70%. Therefore, in order for Malaysia to achieve a 100% sufficiency level, rice production in the country must increase. 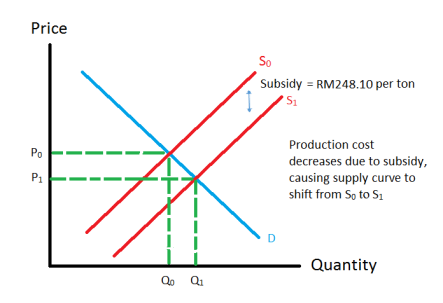 Referring to Diagram 1, S0 refers to the supply of rice that the local rice farmers can produce without subsidy. With the introduction of subsidy by the government, local rice farmers collect RM248.10 for every tonne of paddy that they harvested. This indirectly lowers the cost of paddy production for the farmers, which allows them to expand their production from S0 to S1. If the subsidy provided by the local government continues, it is possible to further increase the production rate of paddy in Malaysia and thus increasing the self-sufficiency level of the rice market. Furthermore, Malaysia will be less dependent on foreign rice to meet the nation’s rice requirement, and a self-sufficiency rice market will prepare the nation to face any food crisis similar to the rice crisis in 2008, which might occur in future. According to Christopher Teh Boon Sung who is a senior lecturer at Universiti Putra Malaysia, the nation would need to increase the rice yield per capita to a minimum of 106 kg in order for Malaysia’s rice market to be 100% self-sufficient by 2015. Rice production in Malaysia is largely restricted by the fact that most local farmers do not have enough modal or funds to further expand their supply. Therefore, the nation’s Rice Subsidy Programme will provide the necessary benefits to assist the rice farmers to increase the nation’s rice supply.

Besides being beneficial to the producers, the continuation of the Rice Subsidy Programme by the government of Malaysia will also help lower the cost of living for the low income earners. While the subsidies provided by the government are distributed to the rice producers only, it has a direct effect on consumers as well. 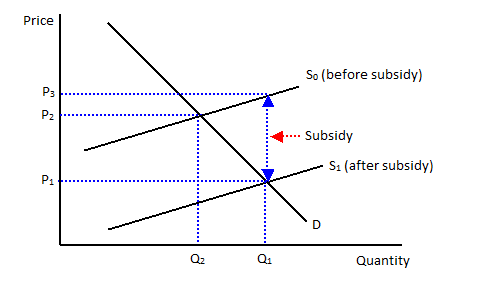 As shown in Diagram 2, the subsidy given to the producers shifts the supply curve to the right from S0to S1, thus lowering the equilibrium price of rice from P2 to P1. This will benefit the low income earners as the reduction in price equilibrium of rice allows them to consume more rice at a lower price. Furthermore, producers will not suffer any loss from selling rice at a price lower than equilibrium as the amount subsidized by the government (P3-P1) covers the full market price. In other words, with the existence of the Rice Subsidy Programme, it assists both local rice farmers and low income earners to ease the burden of rising costs of living due to other developments in the nation. On top of that, the reduced prices of rice due to subsidy will also protect local rice companies against competition from imported foreign rice. Consumers will be more attracted by the cheaper prices of local rice, which will result in local rice being the preferred choice over the others.

One of the main reasons why the Malaysian government should discontinue subsidizing essential goods such as rice is due to the fact that subsidies require massive amount of funding for it to be financed. While giving out subsidies to rice farmers has been a norm in the country for many years, the government of Malaysia should also consider the fact that it is very costly for the nation to continue funding them. According to the Finance Ministry of Malaysia, the government allocated a staggering RM528 million to fund subsidies for 700,000 metric tonne in 2013. Moreover, the rice subsidy provided by the government inevitably comes with an opportunity cost. As a large portion of government’s funds being allocated for the rice subsidy, the government is unable to increase the budget of other essential sectors in the nation such as education and infrastructure development. By discontinuing the subsidy for rice in the country, the government will obtain additional funds to increase its expenditure in other sectors which could reduce the burden of citizens even further. With that, the government is able to execute other essential policies such as free education. Besides that, the government should also take into account that the continuation of rice subsidy will lead to long-term environmental issues. As the government aims to protect local rice farmers and encouraging them to increase rice production in the nation via its subsidy programme, it might also encourage the rice farmers to use intensive farming methods in order to gain faster yields. Those intensive farming methods might be a huge threat to the sustainability of the country’s ecological resources. If that happens, concerned non-governmental organizations or angry citizens will possibly stage mass rallies and protests which could tarnish the nation’s image in the eyes of global investors. Moreover,

With so much taxpayer’s money being allocated as subsidy for rice by the Malaysian government, there are surely questions on who benefits more from the subsidy.

A suitable policy which could possibly satisfy all parties is that the government removes all trade barriers for the rice market in Malaysia. This policy has a slight similarity to the one executed by Thailand’s military government which dismissed all rice price-support scheme imposed by the former civilian government. In order to run free market policy for the rice industry, the policy will require BERNAS to be removed as a sole importer for rice, and the abolishment of the Rice Subsidy Programme in Malaysia. The objective of this policy is to allow the prices of rice to be set by the forces of supply and demand without government intervention. As a direct result of this policy, rice supply in the country is expected to decrease due to the fact that local rice farmers no longer have the aid to increase their production capacity. However, this will not be a major problem as the gap between production and consumption can now be filled up by rice vendors importing rice from foreign countries. As BERNAS no longer holds the rice import monopoly, rice imports are expected to increase as vendors face competition among one another. More importantly, the government will no longer have to fund over RM500 million each year and can allocate the extra funds to other sectors. One of the disadvantages of this policy is that the prices of rice are expected to rise slightly following the removal of subsidy. However, that will only affect consumers for a short term, as competition in the market will set a lower equilibrium price sooner or later. Also, removal of subsidy might cause dissatisfaction among farmers and low income earners who no longer have additional aids to bear the high costs of living.

In conclusion, the Rice Subsidy Programme in Malaysia has its advantages and disadvantages.