Small and Medium Enterprises in Economic Growth of India: Directions towards Sustainable Development

The inclusive growth is prerequisite in any of fast growing developing economies. Micro small and Medium Enterprise (MSME) play vital role in the socio-economic development of the country. In 2011-12, 36.18 mn enterprises were operational and employed around 80.5 mn people of country, second largest after agriculture sector (MSME Annual Report 2011-12). They accounts for 40 percent of India’s total exports, contributing 45 percent to Indian manufacturing output. With all the good things the darker side of MSME, it attracts only 2.33 employees per unit (on an average), they contributes mere 17 percent to the Indian GDP. This paper will highlight the reasons behind the shining India and Bharat. This paper will also focus on the facilities, scheme provided by the central or state government of country, its implementation and possible solutions for empowerment and spreading its boundaries beyond the country through international cooperation scheme.

India’s economic growth is expected to pick up a faster pace in 2013-14 and record six per cent plus levels of gross domestic product (GDP), according to Mr C Rangarajan, Chairman, Prime Minister’s Economic Advisory Council (PMEAC). Country reported to expand at a better growth rate as compared to its three BRIC peers China, Russia and Brazil in May 2013, as per HSBC survey. India witnessed an improvement in its business climate on the back of increased foreign direct investment (FDI) and greater revenue receipts by the Government. The ‘BluFin Business Cycle Indicator (BCI)’, reflects macroeconomic developments on a monthly basis, stood at 165.3 points in July 2013, 5.3 percent higher compared to July 2012 which implies that business performance is comparatively better than previous year.

In economic development scenario, India is leading from all fronts i.e. 2013 FDI confidence Index stands 5th, 2013 Deliotte Manufacturing Competitive Index stands 4th, 2013 KPMG Change Readiness Index stands 65th. 2013 Global Innovation Index stands 66th. While on societal development front, India’s condition is not upright. As per the United Nations Development Programs (UNDP) Human development Index 2013 India stands 136th. In inequality Index, India stands 91st, in gender inequality 132nd, value of multidimensional poverty index is 0.283 on basis of year 2005/2006. A major cause of poverty among India’s rural, urban poor both individuals and communities, is lack of access to regular job opportunity, productive assets and financial resources. High level of inadequate health care, illiteracy and extremely limited access to social services are common among poor people. Seven states – Chhattisgarh, Bihar, Odisha, Rajasthan, Jharkhand, Madhya Pradesh and Uttar Pradesh – account for 61 per cent of India’s total poor. Chhattisgarh is the poorest state in the country with approximately 40 per cent of its population being below the poverty line (www.downtoearth.org ). According to NSSO 66th Survey 2010, around 52.9 percent of population engaged in primary sector (agriculture and allied sector) contributing 19 percent to gross value added (GVA) of country, 22.7 percent of working population engaged in secondary sector which contributes 28 percent in GVA and 24.4 percent of population engaged in tertiary sector (Services) contributes 53 percent in our GDP. Considering NSSO 66th Survey, around 75 percent working population engaged in primary and secondary sector of the economy, and resides countryside or in outskirts of cities. While considering the basic amenities in such areas are vulnerable i.e. health care centres, schools, sanitation facilities etc. These differences demarcate a thin line between Shining India (Cities) and Bharat (Villages, towns and outskirts of cities) in terms of societal development and economic parity.

In dynamic economic world, business innovation and competitiveness helps Small and medium enterprises to grow leap and bound. According to the Global Manufacturing Competitiveness Index, 2013, Developing nations are emerging as potential manufacturing destinations like china ranked 1st as best manufacturing destinations while other developing nations are India, Brazil, Vietnam Indonesia etc. GMCI, 2013 report envisaged that in next five years the above mentioned nations will be key manufacturing hubs along with three leading manufacturing powers i.e. USA, Germany and Japan- remained ranked in top 10 most competitive nations today. Across the world, more than 95 percent of the enterprises are SMEs and employs 60 percent of total private employment (Ayyagari et al. 2011).

The SMEs are lacking in knowledge and information base which reflected in poor work practices mainly the managerial and technical abilities among owners and managers. They mainly fall sort of environmental awareness and its impact and focused toward short term gains over long term objectives because of limited resources and lower capital-output ratio compared to a competitive large unit. Mainly SMEs are reluctant to the programs and policies i.e. waste management circle initiated by National Productivity council because of lack of their nature (Dasgupta, 1999).

Urban and Rural working Population across the sectors: 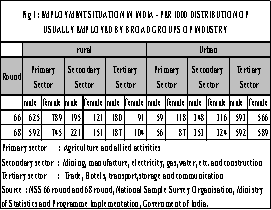 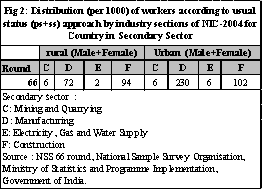 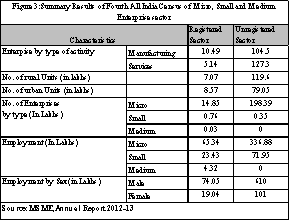 As per (Figure 3) MSME Annual Report 2012-2013, rural registered MSME units are lesser than urban units while unregistered Micro and Small (MS) rural units are far more than urban units. Another important aspect of Indian MSME sector is that micro and small enterprises are more than medium enterprises and employed more number of population compared to medium enterprises where labor efficiency, economics of scale and environmental friendliness would not be considered as a parameter of growth. The overall labor efficiency is gloomily low which signifies poor quality of employment mainly because of informal employment called casualization. In manufacturing sector, 88 percent of employment lies under such category (Kannan (2011). According to planning commission estimates, casual workforce earnings were only one-fourth of the wages of regular (full time) workers (Rs. 51 as against Rs. 200) in 2004-05. Prevalence of poverty among casual workforce, self-employed and regular was as high as 32 per cent, 17.5 per cent and 11 per cent respectively with an average of 20.51 per cent for all employed workers. (Planning Commission, 2008, Chapter 4, Annexure 4.7). 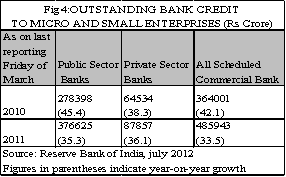 While considering the outstanding bank credits to micro and small enterprises (Figure 4) are on higher side with year on year increase of average 33.3 percent, which reflects the position of respective enterprises and condition of workers working for such enterprises, because it’s obvious that if an enterprise is falling sort of funds to manage its outstanding credit taken from various banks, how it will take care of its enterprise and workers. It reflects that mainly MS enterprises are dragged behind due to falling short of funds and other finance facilities which requires to compete with established local and global players in respective market.

Unlike service sector has practiced skill scarcity and growth in service sector is reasonably more skill demanding than manufacturing sector at higher skill levels. Indian policy makers needs to focus on manufacturing sector like china counterpart which leads in exports and generated huge and stable employment environment by focusing on MSME model (Ramaswamy, 2012). Microenterprise development could generate income and enable poor people to improve their living conditions, has only recently become a focus of the government. The government initiatives and scheme like cluster development program, integrated industrial development scheme and credit guarantee fund scheme etc which stimulates inter-firm linkages and network have assisted MSMEs to move up in the value chain and gain competitive advantage, given access to technology upgraded production technology in sector should be spread across the industrial zones of the country by conducting workshops and training camps to reap the benefits (IBEF, 2013). The report of Task Force on MSME (2010) provides roadmap for the enhancement and up gradation of MSME sector and mainly emphasized on following key issues:

Goyal M, (2013, June 09). SMEs employ close to 40 percent of India’s workforce, but contribute only 17 percent to GDP. The Economic Times retrieved from //articles.economictimes.indiatimes.com/2013-06-09/news/39834857_1_smes-workforce-small-and-medium-enterprises.

NCEUS (2007) Report on Conditions of Work and Promotion of Livelihoods in the Unorganized Sector, New Delhi, Government of India and Academic Foundation.