Impact Of Unemployment On Economic Development


Unemployment has become an issue of major concern in different countries this is as because a lot of individuals are ready and available to work but are not able to secure this job opportunities. Different studies and expert analysis on Economics have discovered the various reasons as well as effects that unemployment has caused and have made effort to resolve some of the problems. the irregular recover in economy as well as downward successive review in the growth of economy and projections has made substantial impact on the situation of employment on global scale. The report of the International Labour Organization ILO(2014, P.11) observed that around the world, there are over 200 million people who are unemployed as at 2013, this an increase of nearly 5 million compared with the year before In many countries, competition in the market is a major cause since the employment opportunities are few. As a result the few opportunities have too many qualified individuals chasing it Nitzan (2011, p.4) compared unemployment and labour market with the case of demand, supply and price index

Scale of the problem and Evaluation

Unemployment and food price Inflation: Unemployment has been cited as being a major social evil; a cause the rise in poverty. It produces social as well as economic effect which also is a major issue of society. The problem of poverty among those who are unemployed is often very high due to the fact that these persons are not able to have a sustainable means of income. Looking at it from the social angle, there is an increase in illegitimate means of earning a living. If you consider an environment with high unemployment rate, you will notice that such place has increase in various social vice like gambling, robbery, bribery, prostitutuion etc. This accounts for the social insecurity issues created by unemployment (MCgrath 2012, p.1)

Youth unemployment: loss of resources particularly human resources is another problem unemployment creates. With millions of able bodied men and women not able to put their skills and talent to use. This effect makes the persons unproductive, thus making the economy suffer in not using those productive abilities. Such economy experiences slow growth at the various sectors; the tertiary sector being the most affected as a result of the sector not getting enough funds to sustain it. A further impact is the slow rate of self-employment as savings is not easy for the large population of unemployed thus they have little or no capital for investments. The situation of unemployment in a society will greatly impoverish the citizens as employers tend to take advantage of the situation to pay very small for labour. Such economy experiences a devaluation of labour as the employers take the upper hand.

Economic growth in certain industries: when there’s a boom in some industries, there is sudden influx of people to that industry. It will not be easy to accommodate an increasing population of people who want to be part of that sector. For example an economic growth in the textile industry will increase the rush into that sector, which will often force individuals to focus attention in the textile industry and ignore skills available in other sectors. With such push, unemployment will gradually set in first for that industry and later on due to reduced skill available for the other sectors, unemployment spreads to other industries.

Causes of the Problems

The demand-side causes are: Economic Cycle: The Competition for labour is the reason unemployment seems to have stronghold in many economies. Since opportunities get fewer with increasing population. The result of this is that for every available position, there are several qualified individuals and as one person gets the position, another becomes unemployed. Indeed the present shift in labour demand has worsened the situation even more, as technology driven labour is taking over people driven labour thus more people redundant as one machine replaces the task of human effort. Employers consider the technology driven labour of greater benefit since the idea of multi tasking also encourages on man operating more than one machine

Supply Side causes include: Rising global commodity prices, high labour costs and poor workforce skills and lack of infrastructure. Apart from the demand and supply side causes of unemployment the exchange rate from one country to another can greatly affect the unemployment rate in that region. For example, due to the technology driven labour, a lot of employment opportunities are open to countries where labour is cheaper, thus causing an increase in unemployment in the countries where labour is emigrating (ILO 2014, p.18). This migration of labour from higher economies to the lower economies places competition of employment on the higher economies as employers keep looking for economies with cheaper labour. One of the theories on unemployment rate and its relationship with the growth of economy is the Okun’s law.Okun’s law is a statistical analysis of the relationship that exist between the unemployment rate of a country and the economy growth of that country. (Fuhrman 2015, p.1) Okun’s law as explained by the St Louis Federal Reserve Bank is expected to identify t he extent of the gross domestic product (GDP) of a country could be lost as a result of the unemployment rate rising more than its usually rate. Furthermore, it explains that the idea behind Okun’s law is that the amount of labour depends on output. Which implies that there exist some positive relation between employment and output (Fuhrman 2015, p.3) that is: total employment is equal to the subtraction of the unemployed from labour; thus a reverse relationship between unemployment and output. 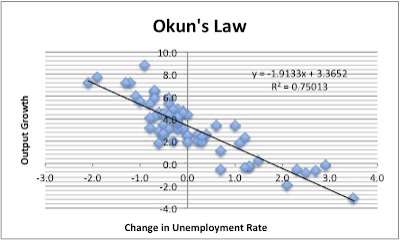 The most significant of these problems are exchange rate and the competition from the lower wage economies. The policies that will be most effective in dealing with these problems vary according to the problem. For example for Structural unemployment Investment in education and training to give workers new skills will effective. Others include

Cyclical unemployment caused by a fall in consumer spending will require reduction in income tax rates which is a Fiscal policy (ILO 2014, P.36)

For Cost-push inflation caused by increasing labour costs an effective policy would be to encourage immigration and investment in technology (Nitzan 2011, P.7)

When Fiscal & Monetary policy are implemented the following are possible effects

Unemployment affects the economy in many different ways but it can be minimized by strategic Government intervention. There are policies that help to contain the effect of unemployment considering that some of the causes can be handled with some of the economic policies. However the choice of the policy has to be analyzed carefully to produce relevant result. For example reducing income tax will only increase consumer spending if the marginal propensity to consume is high. ILO (2014, P.27) pointed that Policies to reduce inflation might have a negative effect on unemployment & economic growth (and vice versa) and improving education might solve the problem in the long term but not in the short term