Impact Of Airasia On Indias Economy


Malaysian based. This group operates scheduled international & domestic flights in 22 countries and around 100 destinations.

AirAsia expanded its operations in India in 2012, in joint venture with TataSons. Since Indian government allow an FDI (Foreign Direct Investment) of 49% in Airlines, the company hold 49% stake with TataSons having 30% and Telstra Tradeplace’s Arun Bhatia acquiring 21% stake. AirAsia has decided to invest 30 million dollars to 50 million dollars to start up the airline in India.

The company in 2013, as a promotional tool to penetrate into the Indian market, has announced booking of 2 million seats from some of south Indian cities (like Chennai, Bangalore, Kolkata and Tiruchirapalli) to south east destination like Bangkok, Kuala Lumpur etc with a very low coat ranging from Rs 3300 to Rs5500. The company has a standard practice to open booking of seats a few months in advance at nominal price and then increasing them as the day passes to come up to ten times near the flight day. This is to assure filling of certain percentage of seats with low fare and then going to highest level. This practice reduces the gap between demand and supply as only little number of seats go vacant. The offer of the company is quite different from Tiger Airways, which provided 10 seats on every flight for Rs 2700 to Singapore from Banglore, Hydrabad, Kochi, Chennai, Tiruchirapalli and Thiruvananthapuram. Fares offered by the company on different routes are shown below: . 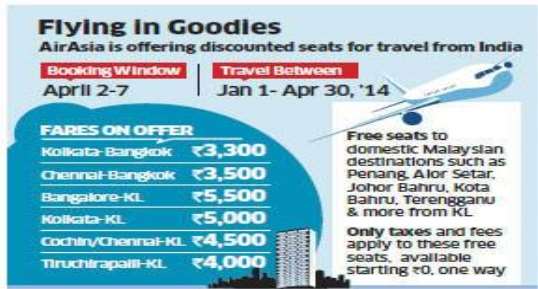 The company is specially targeting the upper middle class customers, travelling by train, & competing in budget carrier space which is dominated by SpiceJet and IndiGo. However, gaining a profitable position would be quite challenging for the company in the Indian market which is already incurring huge losses in spite of recent discount on fares offers of existing Airline Company. It has incurred a combined loss of $400 million to $450 million in the quarter of July to September. Another challenges are high fuel prices in the international market, stiff competition, high operating cost and political opposition, regulatory pressure and uncertainty in India as Indian Aviation Industry was opened to foreign investors recently.

The company will face strict competition on route of Kolkata from SpiceJet, Jet Airways, IndiGo and Air India which combines offer 56 flights on weekly basis (Rai, 2013). The competition will get fiercer on Bangalore where 101 weekly services are offered by the stated four.

Since the Airline industry is an oligopolistic market structure with few big players, the fare cutting move of AirAsia company will definitely copied by other firms to remain in the competition, as it is one of the basic feature of oligopolistic market that fare cutting or increasing move by one is followed by other sooner or later. This will create a fare war among the companies, benefit of which can be reaped by customers.

The company has taken this step as low cost airline companies have predicted to have greater potential in Asian countries like India whose population is above one million and the population of middle class is growing day by day which proves to be a huge market potential for the company to grow. (Upadhyay, 2013)

According to the regulation of Indian Government, a foreign company can enter to Indian Airline sector with 49% stake only in the form of FDI, the regulation normally need a carrier to have domestically operated for at least 5 years with twenty aircraft fleets before starting its operations internationally (Singhal, 2013). Therefore on this basis international market opportunities for the company will concentrate on those routes where highest traffic volume already exists.

Upcoming opportunity for the company:

On the basis of macroeconomic metric based on the population of city, Surat (Gujrat), Patna (Bihar) and Bhopal (Madhya Pradesh), which are largest Tier 2 cities of India, are not connected to Chennai. Surat has a population of around 4 million, Patna has 1.6 million populations & Bhopal has 1.8 people living there. (Balasubramanyam, 2013)

Therefore AirAsia India can also plan to consider its services to these cities to meet up the potential demand.

India will get benefit in the following ways:

Overall this move of the company is good for economy as well as customers as it will allow maximum customer to avail airline services and create ripple effect. Also Indian market has potential as its size is expected to grow in next 10 years from sixty million passengers to around 450 million passengers which is also a good news for the company