When it comes to leadership, finding the most effective style is imperative. Leadership comes in many different forms that are utilized based on the situation. In particular, the situational leadership model, a style that is flexible and can be molded to create a resolution that rectifies any issue and promote positive change. The focus of this paper would be examining what situational leadership is and how this style of leadership could have been applied to IBM’s decision to discontinue their telecommunication positions. There are four styles that make up the meaning of situational leadership and different factors that determine which style is best used in a given situation. The four styles are Telling, Selling, Participating, Delegating (Hersey, & Blanchard, 2015). Hersey & Blanchard (2015) explained that to determine which style to use, a leader must consider the competence of the follower along with their willingness to commit to performing a task.

In the case of IBM, they were the company that spearheaded the work from home idea with the intentions of saving the company money and office space (Useem, 2017). Their model became the model other companies followed in implementing their own telecommunication department. Companies such as Yahoo who ultimately ended their telecommunication jobs in 2013 and deemed the reason was to improve “communication and collaboration” between their employees (Pepitone, 2013). Even though the initial reason for creating the telecommunication positions was accomplished seeing as the company saw exponential growth in the number of employees working from home and increased revenue due to less office space (Useem, 2017). However, with declining revenue over the last 20 quarters, IBM made a decision that drastically affected over 5,000 at home workers (Useem, 2017).  Just like Yahoo, IBM received backlash initially once the decision was made to no longer offer the at home positions and bring employees back in the office.

After researching it was found that, yes it was initially assumed that the morale would be negatively affected. However, in the long run just as Yahoo’s decision had previously proven, morale was not negatively affected. This was a confidence builder as IBM’s leadership move forward in announcing and basically giving an ultimatum to their employees to return in office or leave the company. They were given more of as directive or as it relates to the Situational leadership, they were experiencing the “Telling Style” of leadership. This is because the decision was made based on what leadership deemed necessary without negotiation. Leadership, in any attempt to create change, needed to establish the style that will take the least amount of time and have the best impact for the company and its employees. Variables they would have needed to take into consideration were their own bias, their leadership style, their followers and the goal they are working towards. Situational leadership gives more structure to leadership when managing telecommuters because it is easily modified to respond to the needs of telecommuters. Hersey & Blanchard (2015) discovered a way to effectively determine which component of the situational leadership model to use based on how committed the person was and if they were able to perform the task as Figure1 has illustrated; starting with the above mention “Telling Style”.

This situational style of leadership has more of authoritative undertone and leaves little room for employees to give their suggestion or opinions about something they have been tasked to complete. In most cases this style is successful when employees are on board with the task placed in front of them but need guidance in how to do it. Having that leader to show or tell them exactly what to do and how to do it works more in their favor than those who are more experienced. For IBM their bottom line improved but the lingering effects on their employees left much to be desired. This left many employees disgruntle and displaced due to the impact it had on their everyday lives. This approach would have been more appropriate if the employees were all willing and prepared to conform to the decision. This will then warrant this style because you would have the low competence and high commitment set in place by Hersey & Blanchard (2015) to support the decision. Nonetheless, using this leadership style would be more appropriate if there is an urgent issue that requires having one person in charge of many. Good examples where this style would be most beneficial would be the military or an emergency room. These two line of work requires structure because a mistake can be detrimental or life-threatening. Therefore if IBM wanted to use this style, one suggestion would have been to offer an extension to those not located in a certain mile range of a home base office, so they would have been better equipped to relocate or find new employment by the time the implementation of this change too place.

This style of situational leadership requires the leader to show their followers to how to complete a task and encourage them to be willing to learn how to complete it if they are not knowledgeable. Research shows that most would agree that in IBM’s case this style would be the best leadership style to use because everyone is at a different skill level when communicating with the customers and need a different level of direction and guidance (Hersey, & Blanchard, 2015). The goal of this leadership style is to help improve the employee’s knowledge of the job and interpersonal skills in the workplace (Kasmil, & Zakaria, 2018). Seeing as though one of the main reasons IBM stated the reason for making their employees to return to office is to be more connected to its employees (Useem, 2017) the coaching of those who had not been in office in years or never would be essential. The leader would need to make sure there are plans and support teams put in place to assist the employees once they return in office to ensure their success. For those who were new this type of leadership is especially successful because they are more impressionable because there are not as many habits formed and are more accepting of feedback and directions. Their suggestions and opinions are not tainted by years of changes and different leaders. This leads us to the next style of situational leadership “Participating Style”

This style as it relates to IBM’s decision would be best for those who have been with the company for years. Most of those who will benefit from this type of leadership are very knowledgeable in the job they do but are complacent in where they are and are hard to convince that the decision made has more pros than cons. This style is very closely entwined with coaching in that both encourage employees to push themselves to be better to reach their full potential. Coaching is geared more towards those who are not as knowledgeable of the job. However, those in this group need encouragement, support and leadership participation (Hersey, & Blanchard, 2015). This means the leader will work more with their followers in a democratic manner where their ideas and opinions are taken in consideration when decisions are being made even though the final decision is that of the leader. As Todorov (2017) states in article, 4 Situational Leadership Styles to help develop your teams, it is more about the relationships that are developed within the group rather than the task the group is setting out to complete.

This style of leadership is more ideal in the eyes of the company. This is when you have employees who are highly skilled and willing to complete any tasks placed in front of them. These are the people who when IBM made the announcement were not fazed by the decision and followed suit with what the company needs were. These are going to be those who relocated and were proven to be just as productive as before if not more. Leadership in this environment will just need make necessary decisions, make sure they are continuing to excel in their positions and prepare them for growth in the company (Todorov, 2017).

There were a few companies who made structural changes prior to or around the same time as IBM. One being Hewlett-Packard who decided to do a massive layoff which was explained by giving the employees the facts and details as to why this decision was made. There was no vague explanation said CEO Meg Whitman. She advised that most of those laid off were more understanding the higher the position, because they believe in the need for the change to improve the company financially. She is also aware that it brought down the morale for a brief time because a lot of people were displaced, however, the outcome outweighed the risk. Her approach was, as a company we are working to be as great or better than the competitors and sacrifices must be made. In this I concluded that her style of leadership was a combination of Telling and Delegation. Telling because even though the cuts were not all made at once, the employees were told with little advance and given the option to become a contract worker or be laid off without severance packages. This left no real alternative to the decision, either way they were losing their current position. Delegation because those who were retained as full-time employees did not need constant direction on what their job was. The cuts were made in areas that the company could potentially rebuild or did not need moving forward.

In that example and with IBM, situational leadership and its different styles can and most likely will be combined for a more effective way of getting a task accomplished. In my opinion, situational leadership house a more comprehensive approach that is adaptable to any issue or task in comparison to other leadership styles. Of all the Leadership styles, situational leadership is the most effective. In IBM’s case there were many different approaches that could have been applied in the telecommunication employees’ return to the office. For example, Fiedler’s contingency theory advised that the most effective leadership is contingent on the leader and how much control is needed over the situation (Fiedler, 2015). In other words, the leader will apply as much direction and assistance needed to accomplish the task at hand. Based on the knowledge or competence level of the employee and how committed they were to the success of the company; the leader would know how to provide the correct guidance to get the job done. For IBM I believe that Coaching, Participating and delegating would have been the most effective leadership styles to apply to their 2017 decision to bring workers back in office. They are just as effective and would most likely produce the least amount of resistance. 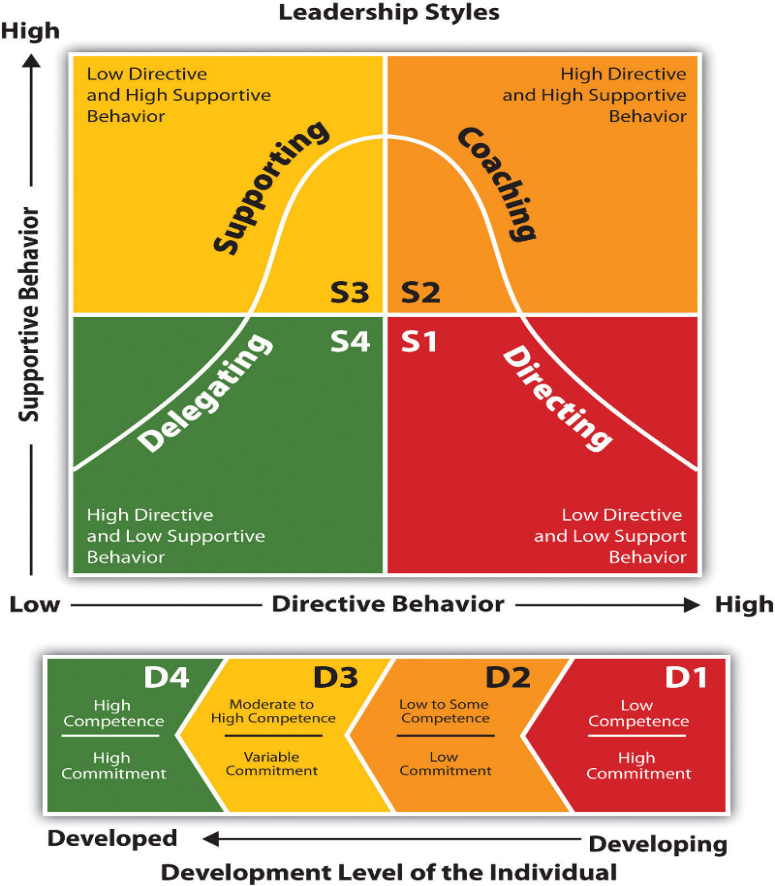