Throughout this course, I continually questioned my understanding of economic justice. With all that is changing throughout our world, the spectrum of economic justice will continually evolve, as interests, laws, human interactions, and politics change. It was especially interesting to see that the majority of the country falls in the top one percent of global wages, making and annual personal income of thirty four thousand. Which brings me to the issue of poverty, and how the global economy operates in a fundamentally unfair manner. Although our economy itself is improving and our nation is becoming stronger, this doesn’t mean much when a significant percentage of the population is struggling to survive.

We have discussed the theories and concepts of what is fair through three different views: Libertarian Capitalism, Socialism and Welfare State. I will discuss my interpretation and personal reflections on economic justice in the world, and what I determine, based off of our class discussions and readings, to be fair and just.

When discussions of poverty consumed the class, I decided to examine the way the world focuses on what needs to be changed to better the economy and end poverty, mostly within the media, versus what is actually being done about this situation. There have been a lot of positive changes made throughout the world, first with Social Security after the Great Depression, to the now popular food stamps, unemployment insurance, workers compensation, earned income tax credits, and on and on. But there are not enough jobs available to most Americans that pay above the minimum wage. There is also not enough investment in education or skill development trainings. Although the minimum wage was never intended to support an entire family, due to the lack of education and skills, a large percentage of Americans are only able to work where the pay is minimum. I feel that basic human rights and freedoms are being compromised by allowing the poverty level to continually increase.

I support a welfare state and its ability to help those stricken with poverty, however I feel that there needs to be major changes before the government ends up bankrupt, from the inability to control how much is going out versus what is coming in. Throwing money at the problem has not assisted in lowering poverty or making those who are in poverty, self-sufficient. Instead of making people in poverty more comfortable, we need to create more prosperity, to provide a way for these people to get out of poverty. The more money that the United States spends on means assisting programs, it seems the poverty level increases, and according to president Barak Obama this budget for these programs will only increase over time. The best way to increase wealth in this situation is through the power of a free market. Protecting capital investments, giving people opportunities to start new businesses, encourage the failed government school system by encouraging competition and choice, and finally encouraging and educating the poor on how to save and invest.

Poverty in the World vs three Approaches to Economic Justice

“Since the beginning of the War on Poverty, government has spent nineteen point eight trillion (in inflation-adjusted 2011 dollars) on means-tested welfare. In comparison, the cost of all military wars in U.S. history from the Revolutionary War through the current war in Afghanistan has been six point nine eight trillion (in inflation-adjusted 2011 dollars). The War on Poverty has cost three times as much as all other wars combined.” (Rector, 2012) So what do we do? How do we make this fair and just? According to Stephen Nathanson, in the book Economic Justice, there are three approaches:

“Despite the fact that states have long been “globalized” in terms of their economic relations, it is only in recent years that scholars have begun to pursue the problem of distributive or economic justice on the wider stage provided by world politics.” (Kapstein, 2006) The past 25 years have witnessed the greatest reduction in global poverty in the history of the world. “The credit goes to the spread of capitalism.” “Over the past few decades, developing countries have embraced economic-policy reforms that have cleared the way for private enterprise.” (Irwin, 2014) Even philosopher Adam Smith described the economy as a “commercial society.” Capitalism tends to cause some issues with regards to the poverty level because it encourages companies to shut down their factories and invest their money elsewhere, leaving people without a job. It basically is all about accumulation of wealth. Charles Murray suggests that people are in poverty because something in them is missing, and he believes that liquidating the welfare and government programs would leave those in poverty using these “crutches,” only the resources of the job market, friends, family, or private or locally funded services, encouraging use their merit and earn.

Individualism is promoted and views on capitalism from a socialist point of view is that of tyranny. They also tend to demand what the rich save and encourage wealth distribution through social entitlement programs, and because fair is never defined it cannot be measured. This view also likes to focus on production for need, not profit. They approve of increased and expanded government welfare assistance, as well as free quality education in a safe and secure environment. “Socialism will establish a new social and economic order in which workers and community members will take responsibility for and control of their interpersonal relationships, their neighborhoods, their local government, and the production and distribution of all goods and services.” (Socialist Party USA: 2013-2015 National Platform , 2014) Socialist believe that poverty is caused by the natural workings of a capitalist marketplace that has always excluded a significant part of the population from decent jobs and, thus, from the ability to purchase on the private market goods necessary for a decent life for themselves and their children.

It is a theory that affords for the total security of its residents and is similar to socialism. It provides entitlement programs and some social insurance to its residents, and provides for persons in need, through an unnumbered amount of programs known as welfare. Welfare incorporates government programs that provide benefits and economic assistance to Americans with little or no income. One of the main goals of welfare in the United States, is to improve the quality of living standards and life, for the underprivileged. Welfare help is usually extended to people other than just the poor and underprivileged and includes students, unpaid workers, caregivers, mothers and the elderly. One of the foundations of this country is personal liberty, and dependency on a government agency for financial assistance can detract from this feeling, and way of life and move into more of a welfare state condition.

Below is a 1940’s cartoon of William Beverage the founder of the Welfare State waiving a wand over big giant “wants.” People got used to living the easy life with all the benefits and they became dependent. Social policy has come to be driven by the very policies that the welfare state was supposed to replace. 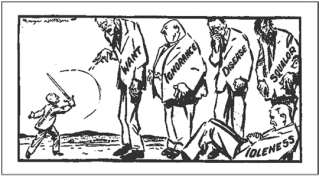 Poverty in the welfare state, even with all the additional benefits provided, to those with lower or no income, is still increasingly high. One reason is because there are some things that the welfare state cannot control, for example:

We have to remember that welfare was not created for the poor, it was created to prevent people from becoming poor.

The many issues and opinions with Capitalism, Socialism and the Welfare State, and the effects of each on poverty are almost one sided. Everywhere you research you will find that each is to its own. So I came to the conclusion that what is “fair” in economic justice with regards to poverty is that the government should continue with the welfare state, fund those in need, and continue to fight discrimination, to the best of its ability. With that said, I don’t believe in our lifetime we will see a major change in the poverty level, as our country continually accumulates debt to protect the underprivileged. So what is “fair” in this case is just making sure that everyone has an equal chance and opportunity to make a better life for themselves. This includes state and government funded programs that can provide people with the opportunity to better themselves. There needs to be better regulations and a limit to the amount of help one person or family can receive, so that each person isn’t just living off the government and increasing taxes for those that work. We as a country, especially with the new Obama Care laws are working to find a suitable solution to decreasing poverty, however, sharing the worlds wealth has never been an easy issue to address and correct. It will take a lot of time and effort, and newer more suitable laws that protect the working class as well as the underprivileged in an equal manner before I believe that there can be a major change in poverty.

Rector, R. (2012, May 03). Examining the Means-tested Welfare State: 79 Programs and $927 Billion in Annual Spending. Retrieved from The Heritage Foundation : //www.heritage.org/research/testimony/2012/05/examining-the-means-tested-welfare-state