As every nation endures the global recession, countries invest on various types of energy sources that offer the maximum benefits. There are many variations on energy that can be used such as solar energy, nuclear energy, wind-generated energy and shale oil reserves. Each type of energy has different economic benefits. At present times, shale oil reserves are to watch out for. Shale oil reserves are usually undeveloped given that the process of extracting its oil is a difficult process. However, the latest technology unfolds the overwhelming potential of shale oil exploration. The accessibility of shale oil resources across the globe and the effect of increased shale oil production have influence that extends further than the rest of competitors in energy industry. In contrast, other sources of energy offer economic benefits as well but only differ with costs incurred.

Among all energy sources, nuclear energy helps to reduce air pollution, balance the Earth’s weather, avoid acid rain, and depletion of ozone layer. Nuclear power plants are environment-friendly source of energy. There are many economic benefits of using nuclear power plants. Nuclear power plants are a good source of income while it incurs low costs on operation. In the United States, it is their second largest source of power. Aside from stability in future price, it also avoids the import on fuel. Although the economic benefits of nuclear power are great, the hype on shale oil exploration overshadows the nuclear industry. As many nuclear power plants are offline, most of them would find it easier to build new turbines for gas exploration than repair nuclear reactors. According to the Climate News Network in London, most of the nuclear reactors in the United States and Canada are shutting down since shale gas produces cheaper power (Brown, 2013, para.1). Moreover, the investment costs required for nuclear power plant is higher compared to shale oil exploration. Hence, the economic benefits of shale gas are better than nuclear power. Another source of energy is the solar power. This type of energy captures the photovoltaic cells that transform sunlight into electrical energy. Its edge among other sources of energy is that sunlight is free; hence, its energy is infinitely renewable. In the future, the cost of solar power is expected to decline below market price. To compare solar energy and shale gas, the latter has many variables to consider on its relevant costs such as land costs, drilling costs, corporate overhead and others. Hence, solar energy is more economic than shale gas when it comes to expenditures. Lastly, wind-generated energy is also an alternative source of electricity. Wind turbines convert the wind that passes through the blades into electricity. One of the challenges on wind energy industry is its disadvantage on costs. Its technology needs a higher amount of initial outlay than fossil fuels. Hence, shale gas is more cost-competitive compared to wind-generated electricity.

Computation for economic costs basically includes explicit costs, real costs and opportunity costs (EconomicConcepts.com, 2012, n.p.). On the other hand, economic profit is the difference between revenue and costs incurred. In this section, the economic costs are cash outlays, opportunity costs, transportation expense to China and Beijing Costs, Insurance and Freight (CFI). Below is a table of the writer’s own model of economic costs and profits of shale exploration (Figure 1). The figures are rounded off to the nearest whole number.

In Figure 1, the figures indicated are merely estimates through extensive research. In the explicit costs, the costs incurred are for pipeline, land, well, drilling and transportations. These are costs that are directly attributed to the shale gas exploration. The estimates used for rate per acre, well, and truck are average computation for each account. Secondly, real cost includes all the labor costs incurred to extract oil from the shale. Lastly, the opportunity cost pertains to the amount which could have been earned using other alternatives such as nuclear power plant and so on. In the illustration, total revenue exceeds the total costs incurred which results to an economic profit of $7 Billion. Hence, the model shows a cash-generating shale oil exploration. The next illustration (Figure 2) shows the extended model of Figure 1.

In Figure 2, the amounts from Figure 1 are retained and only the other costs account is added as well as operation or fracking cost and construction expense. The marginal cost is computed by dividing the change in total cost by change in total quantity of shale oil (AmosWEB, 2014, para.4). Hence, $ 8,181,860,000.00 – $ 4,982,500,000.00 is $3199360000. Change in total quantity pertains to the change in output of shale oil extraction. For instance, a company can extract 100,000 tons of shale oil in a year and doubles for the succeeding years. Below is the computation for marginal cost per year.

In Figure 4, the amounts from the year 2003 up to 2013 are data released by World Bank Commodity Price Data (Knoema, 2013). Following the past trends on Dubai’s oil prices, the next 6 six years are forecasts through the Microsoft Excel’s trend function. The illustration shows a forecast of the increasing oil price in the next 6 years. UAE’s oil price is to increase by $7-$9.

Figure 5. Comparative Energy Forecast on UAE, UK and US 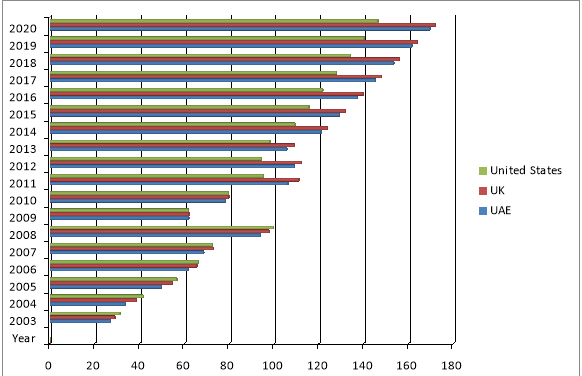 Figure 6.Bar Graph of Energy Forecast on UAE, UK and US

Figure 5 illustrates the past and future forecasts on the oil prices of UAE, UK and the United States. Using the past trends on oil prices of these countries, a forecast for the next 6 years is made. The same method of computation has been made similar to Figure 5. Its summary on Figure 6, UK has the highest amount of oil price in the next 6 years while UAE falls second. Although United States has usually the highest price of oil in the last 10 years, UK started to lead starting 2012 until now. Hence, both United States and UAE has to improve more in terms of their energy economics to surpass UK’s performance in energy industry.